394 MY TOE by RALLOU PANAGIOTOU

The 2016 annual exhibition of the Royal Society of British Artists is presently on view in the Mall Gallery.

The inspiration for Brian George's paintings comes mostly from the East Anglian landscape. Lowestoft, situated on the North Sea coast, is the most easterly settlement in the UK. It's a piece of landscape I have known and loved all my life. I know the pier as a construction which has changed many times but continues to stretch far into the steel grey North Sea.

The pier was built  in 1846 and was 1320ft long. It originally included a pavilion and bandstand,both of which were later destroyed by fire. Legend has it that while crowds flocked to nearby Great Yarmouth, the more discerning came to Lowestoft, quieter and more genteel.

This photo was taken in 1948. I imagine the pier was trashed during the Second World War(1939-1945) to prevent occupying troops taking advantage of it.  A replacement pavilion was built in the 1950s  which included a miniature railway, After further temporary closure the entire pier was reopened and now features a family entertainment complex and cafes.


Images of dereliction and the shapes created by decaying buildings (such as Suffolk Second World War coastal defences)  are of particular interest to Brian George. His hard edge flat style of painting emphasises a stark reality, stripping away decorative, distracting detail. His colour palette in South Pier Lowestoft is muted, cool, subtle, exquisite.  The paintings achieve their effect by the careful overlay of thin glazes of oil colour, creating subtle and often unusual colour combinations.


I always paint using oil on canvas with the use of brushes and rags. I paint by creating flat, even areas of colour and hard edges. I usually work on eight to 10 paintings at once because of drying glaze layers. I work from both my sketches and my photographs. It takes me about three or four months to finish works of art that have been commissioned.
Brian George 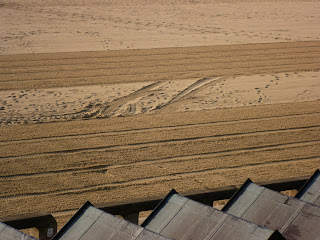 Lowestoft is said to be one of the first places in England to be settled. In the last century the fishing industry thrived then dwindled; in the 60s oil and gas exploitation brought new prosperity; more recently it has begun to develop as a centre of renewable energy.

With a wide, wide beach like this, with colourful huts  keeping a watchful eye and its sand combed each morning, with an artist of the calibre of Brian George to show it as it is, what is there not to like?

392 THE TIDE LICKS THE SHORE by TERRY SETCH

FLOWERS GALLERY, CORK STREET, LONDON
'The beach has the power to shape everything in its own image
TERRY SETCH

The show Reduced To Rubble  makes a powerful impact as you enter the Flowers Gallery.  Monumental wall hangings greet you. The work which inspired the title of the show  measures 265x172x20cm. At first sight they look like impressive three-dimensional carvings of knights and burgers and their wives, the sort  which line cathedral aisles and represent the values of the age. Move closer and they become naturally occurring patterns and shapes reminiscent of nature and living organisms.

Reduced to Rubble brings together new works on the theme  of the beach landscape, a subject present in Terry Setch's work since 1969. For many years the artist produced his paintings directly on the beach, on purpose-made tarpaulin sheets. He fused together industrially produced materials and environmental rubbish including resins, microcrystalline wax, polymers and found plastic objects. The beachscape provides him with important metaphors  for wider political and social concerns, particularly the devastating impact of pollution.

The Tide Licks the Shore (259x169x18cm) evokes the intimate, rolling meeting of sea and shingle. And 'Lick' is a visceral and bold verb, linked with sex and food: in the process of licking, both agents are changed by their encounter. The central three-dimensional shape above is organic and sinewy, an effect which came about by partially melting polypropylene fabric into a substance which is then intuitively thrown onto the support while it is still hot.
Tides and winds transform coastal landscapes dramatically. For example for decades the sea crashed against the cliffs of a Cornish cove. Then gradually over time a wide sandy beach appears and every year a different pattern of rock pools is spotted when the tide goes out. A regular visitor notices the difference.  But Setch is reminding us that human pollution is the newcomer at the seaside, a bully,  bringing less benign change as the wind and deteriorating effects of sea water transform both wrecked cars and rocks indiscriminately.


Dozens of artists have walked the walk in the name of art. One of the most famous is Richard Long, whose Walking to a Total Eclipse involved walking 366 miles in 8 days:

In 2009 the Hayward Gallery featured a different approach: its Walking in My Mind exhibition explored the inner working of several artists' imagination through dramatic, large-scale installation art.


In September 2014 Frederic Gros, Professor of Philosophy at the University of Paris XII and author of The Art of Walking and Slowing Down was at Tate Modern  in conversation with the British conceptual artist  Richard Wentworth, who also chronicles daily life, challenging our taken-for-granted assumptions about the things that surround us.  'Look', he says, 'a plate is the only object where you get your own and the minute you have finished with it, it is someone else's'. In the book and the discussion there were lively excursions into the way Nietzsche, Rimbaud, Rousseau, Kant and Proust 'used' walking.

Here Mark Wallinger’s  Shadow Walker (2011) 'uses' walking in yet another way, with a contrasting sense of openness, purpose unknown. He walks (we never see Wallinger but we know that he is there, because he says so), and his shadow  glides its way through the streets of London, sometimes lagging behind, at other times leaping out and stretching ahead, moving fluently over passing strangers and the kerb stones beneath them.  It ignores chewed gum, cigarette stubs, spilt liquids as if they were beyond contempt.

It doesn't take long for us to see the shadows as having an autonomous existence, as ‘real’ as the artist’s actual body. I recall this happening in the first playground game I encountered. On a sunny day our object was to step or jump so nimbly that both feet landed firmly on someone else's shadow. Because shadows move so fast the possibility of disputes was endless but the stakes were high. If two feet had encroached on your shadow everything was spoiled: you became a bystander, out of the game, wanted by no one. A 'no-body'.

Fascination with shadows and the fear/delight at losing them has a long history. J M Barrie's  version of Peter Pan’s shadowy dilemma is central to his story: stolen from Peter, rolled up and put in a drawer as a bargaining counter, treated with soap and stitching in an effort to reunite it with its owner. J.M. Barrie writes that when Peter thought he was going to die he felt scared - and blithe - famously remarking  "To die will be an awfully big adventure'

In the South Gallery, the visitor is confronted by a new sculptural work, Superego, a scale model of the revolving sign outside the headquarters of the London Metropolitan Police. It's made of mirrors. Why is it called Superego? Because we understand superego as the all-seeing eye, omnipresent and omniscient, which acts to perfect, civilise, control, and suppress our behaviour. Here as it spins round and round it symbolises the ceaseless energy and vigilance of the police.

A paradox is that a mirror offers the promise of self-reflection and the recognition of our unique identity. Here, however, the mirrors revolve implacably above our heads, remote and inaccessible. No part of us will smudge or blemish their purity.
Posted by GertiesGirl at 09:58 2 comments:

THE LINES OF TIME 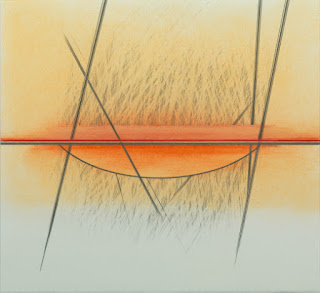 The Royal Academy of Art and its courtyard in Piccadilly currently throng with art lovers who have come from far and wide to see Painting the Modern Garden: from Monet to Matisse.

If you want to experience something exciting and spacious and elegant without jostling crowds, go up the magnificent central staircase, turn right and take a U turn on this floor. Outside the Reynolds Room you will find yourself in a small quiet  gallery lined with Ann Christopher's exquisite drawings, executed in pastel, crayon and graphite. The work on display was completed during a residency in Southern France, near Albi.She describes the forms represented as originating from her experience of the “ever-changing effects of the climate and light on the landscape” in that area.

Ann Christopher is also well known as a non-figurative  sculptor. who works primarily in cast bronze, stainless steel, silver and fabricated Corten steel. I featured her elegant and understated work in Blog 114.  Dark Line was seen at York Way by Regent's Canal, and was part of a complex including the Pangolin Gallery, music venues, cafes and bars. And a sculpture trail.

Ann Christopher rarely draws when she is sculpting; her works on paper tend to develop between sculptural projects. She observes that this is a natural, almost involuntary, process, finding that 'a series of drawing will suddenly end and sculpture will start again'.


The Royal Academy is publishing a new book Ann Christopher A few days ago I heard her talk about her work when she was  interviewed by the art critic Richard Cork, who has written an introduction to the book.


Posted by GertiesGirl at 21:48 No comments: 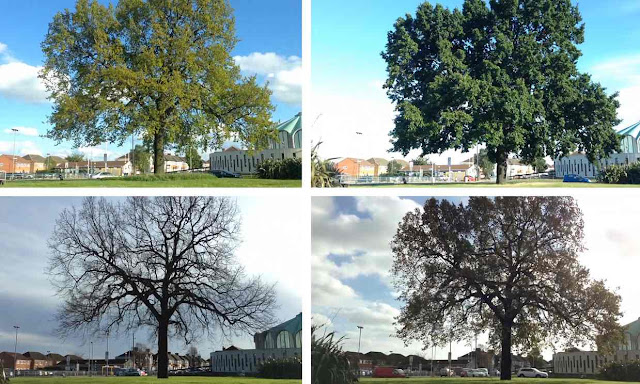 This is classic Mark Wallinger: the eloquence of his ideas as condensed as a sonnet,

In his latest exhibition at Hauser & Wirth in Saville Row, Mark Wallinger has chosen to feature 4 silent video projections of a tree dancing in the middle of a traffic roundabout.

The Fulwell Cross roundabout could be anywhere or nowhere - surrounded by walkers and runners, prams and bikes, commuters and children, wanderers and visitors, wheel chairs and lorries. It's true that the tree is special. It has a name, the Fairlop Oak, planted in 1951 the year of the Festival of Britain. And it has a pedigree: the first Fairlop oak is said to have existed ‘from halfway up the Christian era’. It grew not on a roundabout but in Hanault Forest in a wooded area of some 3,000 acres. It is said that in the midday sun its branches cast a shadow 300ft in circumference. So it's not surprising that it was the venue chosen from about 1725 onwards for the Fairlop Fair, held under its branches every year on the first Friday in July.

The work was filmed by the artist using an iPhone Blu-tacked to his car window as he circumnavigated the roundabout where he once learned to drive. So standing in the centre of the gallery surrounded by endless revolutions of footage, we are encircled by Wallinger, who’s circling the tree. We encounter spring, summer, autumn, winter in the course of a few seconds. We are drawn into his universe where we may choose to reflect on the passing of time as it comes hurtling towards us.  Wallinger has entitled the work Orrery a word describing a mechanical model of the solar system. With the oak tree at the centre of this particular universe,  are we the still silent centre contemplating the orbit of our planet round the sun and its place in the universe?
The work has been described as a ‘cameo of Britain destined to rotate in its tiny orbit endlessly’.