A few steps away from Lila Pearl’s portrait is another child. Sandy is watching TV.  ‘Watching’ is a weasel word for what he’s doing – he’s absorbed, mesmerised, allowing the programme to wash away all the good and bad surprises his first day at Primary School brought to him.
The light is falling from the right, from the screen, possibly a window? It brushes against his hair and lightly sketches the contours of a young attentive face.  Vertical lines pierce a picture which is spare and compact and the colours - mostly sombre whites, silvery greys and dark blues - are warmed by the reassuring soft squidgy sofa cushion painted close to his face.
He’s still wearing his school uniform. Does he enjoy its strangeness? Is he proud of his new status? What impressions are locked away inside him? Has he been named after his father? Will he be an artist too? Sandy doesn't let on. It's the depth of his concentration which fascinates me - the enviable, yet slightly scary, way in which young children sometimes live in the now.

Much later I saw Alex Hanna's work again, Radiator 8,  in an exhibition in the crypt of St Marylebone Parish Church. You can see it too: Blog 339.

Posted by GertiesGirl at 10:13 No comments:

I can get to the Serpentine Gallery by taking a scenic walk across St James Park, Green Park, then Hyde Park. That’s the good news. The bad news is the confusion when you arrive at a Tillmans show. For a start why are the captions so brief, so haphazard and in German? I’d call myself linguistically challenged, not lazy. And they seem to be attached to the wall by a system which means I can’t even work out what they refer to.


I fix on Eierstapel. The colouring is beautiful, muted, pale, almost green. It’s a huge close up of open-topped egg trays with frayed edges teetering precariously in a huge stack. They make me nervous as I stand there, fragile and tactile. In my time I must have broken thousands of eggs: scrambled them, baked, boiled, whisked them, made my hands concentrate on the delicate minuet of keeping yolk and white apart. One tremor and you’re done. It’s a high risk photo. It makes me think of battery hens cramped and just surviving in caged rows.

But why is there so little information, no mention that he was the first artist  working in photography to win the Turner prize?  I remember 2000 well because it was a disappointment. I was rooting for someone else on the short list, Michael Raedecker, an artist who made a breakthrough of a different kind. As well as paint he used thread, embroidery and textiles to create his haunting shadowy landscapes and interiors. He crossed the boundary between art and craft. Perhaps he was contaminated by daring to consort with what is seen as ‘women’s work’?
I also remember the other excitement in 2000 was the way Tillman pinned or nailed his art, some unframed, to various parts of the gallery walls. I’m probably not the only viewer who went out and bought coloured bull-dog clips and Sellotape to ‘re-hang’ images precious to me. One permanent result is a hall lined with a jigsaw of about 50 family photographs in a motley collection of frames. It’s called ‘The Quick and the Dead’: mostly action pictures of 6 generations.

I keep going back to Tillmans' work. I have a postcard of his ‘Space between Two Buildings’ on my desk. It’s what happens between a couple of two-storey wooden houses painted white, standing there with their backs to me, no doors, just a small mean window on the upper floor of each. There’s grass between them but no fence dividing the space. Instead a white fence runs across the houses. Where it’s low I could climb over it. Beyond the fence is a rough track made of warm earth. Beyond that is woodland which, if you squint your eyes, coalesces into a giant hedge. Only the sky manages to get away. It spreads itself everywhere. It’s alive.
There’s no one there. No children kicking a rainbow ball around, no teenagers having a quiet smoke over the fence, no woman hanging out the washing.  Nothing.  It’s the space between the notes of music when you wait for what you know will come next. Or think you know. Sometimes when I hit on a difficult idea I look at the scene and hope a new coil of thought is ready to unwind.

Posted by GertiesGirl at 09:26 No comments:


This is another portrait of an artist’s child from the 2010 BP Portrait Award show. Leon plays for his school and a local team in Kent. Just how relaxed is he in this picture? A stiffness around the shoulders and that cautious look at the viewer betray another sort of vulnerability, which contrasts with his stature and stance.

This is a young man who is strongly present in the room, his hockey stick pushing towards the viewer and the picture plane. It’s a large painting, life size I guess, and hung quite high so that the viewer is as aware of the yellow bands circling his legs (which are nearer eye level) as the rectangle of yellow which is his shirt. His mother, who ‘wanted to capture his growing self confidence and physical presence’, says she was inspired by the luminosity of the yellow shirt.I was doubtful about the inspirational effect of luminosity until, on the way back from the gallery and outside the Royal Festival Hall, I saw a year-old baby in a buggie clad from top to toe in a hand knitted suit: bobble hat, jacket, leggings, the lot.
All the same brilliant yellow as in the picture.

I  feel that this is a colour which is not kind to many skin tones, especially white ones, but the impact was tremendous.  When the baby was whisked away over the bridge, I felt as if we on the South Bank had enjoyed a glimpse of a brilliant sun lightling up a grey day.

Posted by GertiesGirl at 09:01 No comments:

NATIONAL PORTRAIT GALLERY, London
21.9.10
Across the Thames by Hungerford Bridge on a blowy day a woman says to a friend ‘Look over there, you’ve got St Pauls....’ She doesn’t say ‘Look over there, you’ll see St Pauls’, because there are times when you don’t just ‘see’, you ‘get’ it, it’s yours for a moment. What will I ‘get’ when I wander around the first floor gallery to look at this year’s BP Portrait Award 2010 show?
I never know what to expect. One year when the AIDs epidemic was at its height the gallery seemed to be full of pale young men. On the walls were portraits of waste and suffering. I remember being sad and angry at such terrible events, but also wishing that there were more portraits of women. Why hadn’t their year been recorded too? This year roughly two thirds of the portraits are of men or boys but this is partly because the entries include a surgical team round an operating table, the all-male Almus Quartet and a series of 12 portraits of passers-by, of which only one is a woman.
What catches my eye is this portrait of a beautiful child.  The artist reminds me that children are both tough and fragile; predictable and astonishing. Lila Pearl is enfolded in the luscious warm colours of fruit, against which her jumper has the deep green tang of forest pines. Her contours are curved and gentle yet she’s surrounded by sharp geometrical shapes: parallel lines, diamonds, squares. She’s painted in a corner. Or into a corner? Is she going to squeeze out and dart away? Her hand looks secure and relaxed on the plain wooden table but might she suddenly press it down and make a get-away?
She’s painted, we are told, in the precious light of winter sunshine. The artist writes of ‘(Lila’s) vulnerability (which) I, as her mother, see and feel all the time’. I think what makes this a remarkable portrait is the way the artist also conveys her own vulnerability as a mother.  Parenting is a risky business: each child is a one-off product, individually crafted, who needs intensive care over a long period - and there’s no control group to draw on and no chance of scrapping the product and starting again.
http://www.theapenna.co.uk/contact.html
http://www.npg.org.uk/ l


Posted by GertiesGirl at 12:56 No comments:

1. HARRIER AND JAGUAR BY FIONA BANNER 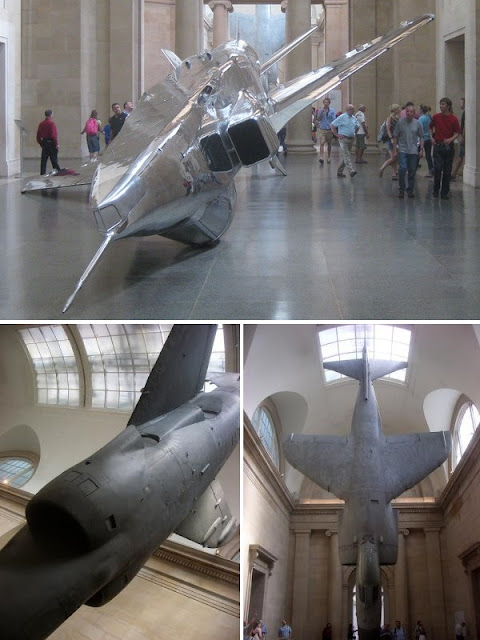 The best time to go is at the weekend. Turning your back on the Thames, walk up the Tate's wide stone staircase, dodge young people sitting there holding hands and eating sandwiches with the other hand. Straight through the revolving doors into the magnificent Duveen Hall. And there it is.
Hanging by its tail from the ceiling and nearly touching the floor, is a huge decommissioned fighter jet, its contents emptied out. It’s a Sea Harrier, 14 metres long with a wing span of 7.6 metres, the kind of plane which saw action in Bosnia and the Gulf. Now it’s a captive beast with feathery markings tattooing its grey surface. It reminds me of dead birds which used to hang in rows outside butchers’ shops at Christmas and which still nestle inside the illustrated pages of Dickens’ Christmas tales. It has plenty of admirers. We stand around and marvel. Lying flat on her back underneath the empty nose cone is a little girl about two years old. Is she safe? I want to run and gather her up but I stand still and admire her bravery.
In front of us is a killing machine – but we cannot deny that its beauty and elegance are awesome. It’s a weapon which was at the cutting edge of technology and is no longer fit-for-purpose. Once its sound seemed to crack your ears, but now it's dumb. A captured beast, a cast aside trophy, scrap metal still confronting us with what war might mean.

"Years and years ago I remember going for a walk with my dad in the Welsh hills. I must have been seven or eight and it was so quiet and beautiful and suddenly, out of nowhere came this Harrier jump jet which completely ripped up the sky. It was a completely transformative moment but we were left, literally with words knocked out of us, wondering how something that was such a monster could be so beautiful." Fiona Banner

Down at the other end of this neo classical gallery I see the outline of a Jaguar jet, lying belly up on the floor, like a submissive animal. Stripped and polished into an immaculate metallic shine, its surface is transformed into shifting distorting mirrors, the kind you see at a fun fair. Some of us play with grotesque images of ourselves but no one who walks past can detach themselves from this monster. Small screws run up and down the fuselage like a row of ants. Some make a patchwork pattern of small squares. As I walk round this huge pregnant belly with its outstretched wings I almost trip over the tapered metal rod protruding at the tail, which starts out slim and inconspicuous, then swells into a pointed end, softly curved as if designed to enter something or somebody.

Why go on a Sunday? Because you will find a joyful noise everywhere: children skittering around the Art Trolley with its cargo of cardboard rolls and foil and coloured paper and glue. Dads are sitting on the floor, backs to the wall absorbed in crafting rockets and airplanes. One of the attendants points out to my 2 young grandsons Sam and Josh that when they get home they can hurl their rockets down from the top of the stairs to see who wins. They smile.