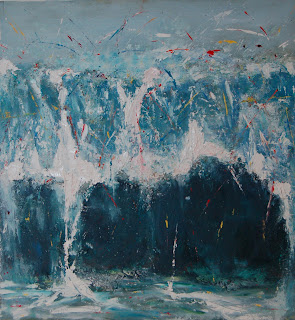 Standing in front of this painting, in a cabin/studio at the end of Hercules Road (where William Blake once lived), there’s a real feeling of danger and wonder. That wall of water is both beautiful and terrifying.

The work is based on a photograph taken by the artist at West Bay, Dorset. ‘I was particularly proud of the photo as I managed to almost crawl under the wave before it broke and I caught the shape in precise detail’. Campbell says she spends  hours ‘sketching and shooting wave movement, sometimes painting on site to capture the immediacy then working on a larger image back in the studio’.

Talking of this work she comments, ‘Translated into a painting, however, it simply looked static; none of that sense of movement came across.  Adding texture with a mix of oil paint and polyfilla gave the weight that was missing, but how to capture the 'zing'?  The answer came to me at 3.a.m. when I woke with a start thinking 'a plastic ruler!'.  Dragging the side of a ruler through trails of bright paint and arcing the streaks across the wave caught the movement that was lacking and gave the combination of weight and light I had been looking for’.

What also struck me about Wave Study was that sinister, flat, heavy floor of water at the bottom of the painting, and nearest to us. I was once sitting by the Aegean sea when the waves became noticeably bigger. There were no passing ferries to set up such a wash. The waves mounted higher and higher but none was as scary as the moment after the largest crashed against the sea wall and instantly pulled away from the shore. For a split second the sandy sea bed, normally covered by a metre of water, was sucked bare.. Later I learned there'd been a minor earthquake close to Athens, 500 miles away.

I mentioned the cabin/studio at the beginning. I was at Open Space situated beside the track on the way into Waterloo station. Once a set of abandoned and derelict buildings, it’s now an inspirational creative space where in over 40 rented studios art happens; ceramics, fashion design, glass, mosaics, jewellery, cutting edge digital technology, sculpture, painting and illustration exist side by side. And they have Open Days and Weekends, with tea and cakes and something stronger. 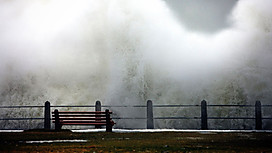 I mentioned  'The Secret Lives of Waves' to the artist as it's one of the most remarkable BBC4 documentaries I’ve ever seen. (This picture is a still and  the link below leads to a clip). She reminded me that the presenter, David Malone, describes how each wave is uniquely born, grows and dies back into the water. She continued ‘It is that sense of individuality and life force I want to bring to the viewer’.
www.helencampbellartist.co.uk.
www.bbc.co.uk/programmes/b00y5jhx
www.makespacestudios.com