Should I - or should I not - take my young grandsons to see this exhibition? On the one hand, it's not likely that they will get to see Jean Tinguely's hilarious and mesmerising mechanical sculptures any day soon in this country. This Swiss kinetic sculptor is best known for work which cobbles together junk, is dangerous, is fun, and critiques the excesses of our society. In 1984 when Landy saw Tinguely's work in the Tate he loved it. 'Everyone had smiles on their faces’. 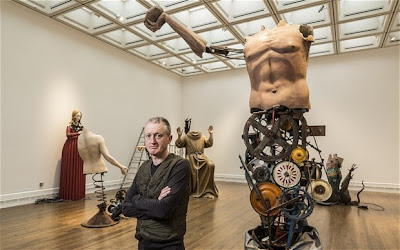 Now as Artist-in-Residence at the National Gallery Landy has had the chance to build seven kinetic sculptures representing seven stories of popular saints. (What is it about the number seven - it's everywhere in folk tales and rhymes?) They're made from recycled machinery, broken children’s toys and unwanted junk, and casts from details in the National Gallery's paintings. The number of visitors at any one time is restricted so that everyone has a chance to pull the levers, wrench the wheels and stamp on the foot pedals to get each machine going. It is not a silent show: it screeches and rattles and howls. It is visceral and theatrical in a way that painting cannot be. It's great fun.

What's not to like? Well, St Apollonia is said to have been tortured by having her teeth pulled out. Here she keeps raising pliers to her face, chipping away at the plaster. She destroys a little more of herself each time, reminding us that martyrdom is often embraced with fortitude rather than avoided at all costs. St Jerome beats his chest with a rock, rather than sitting mildly in some peace-laden library with a dozy lion, the way he's usually shown. Most disturbing of all is a story taken straight out of St John's Gospel where St Thomas's finger is shown repeatedly trying to probe the wounded torso of Christ.

What's not to like about these cartoon characters? I respect the power of myths, believing that they can speak the unspeakable, reaching parts words cannot reach. Laura Cummings (see Guardian review below) writes of the show as 'a tremendous event that seizes the viewer, involving us in a spectacle of passion, conviction, suffering and belief driven both literally and mechanically by violence. Their true subject, in this respect, is awe'.

Are my grandsons ready for this? The answer is very probably.

You may be able to find Adrian Hamilton's perceptive article Heavenly Bodies 20 September 2013 in the inewspaper.
www.independent.co.uk/i

This MOMA link www.moma.org/collection/object.php?object_id=81174 describes one of Tinguely's works as:
'composed of bicycle wheels, motors, a piano, an addressograph, a go-cart, a bathtub, and other cast-off objects...the machine was set in motion on March 18, 1960, before an audience in the Museum’s sculpture garden. During its brief operation, a meteorological trial balloon inflated and burst, colored smoke was discharged, paintings were made and destroyed, and bottles crashed to the ground. A player piano, metal drums, a radio broadcast, a recording of the artist explaining his work, and a competing shrill voice correcting him provided the cacophonic sound track to the machine’s self-destruction—until it was stopped short by the fire department'.
Posted by GertiesGirl at 12:34 No comments:

MARISA MERZ at THE SERPENTINE GALLERY

Which of my blogs is one of the most popular?

Surprisingly it's Blog 76 Untitled, Living Object by Marisa Merz. She's an artist I came across while wandering through Tate Britain, Room 5 Level 5, in May 2011.  I thought it was the first time I'd heard of her. I was wrong. While studying Italian art at City Lit I'd written an essay on Arte Povera artists, who used everyday and organic materials in an effort to subvert the elite status that the art object had reached. She had a pioneering role as a central figure and as the only female artist in the movement.

Now she is to have her own show at the newly launched Serpentine Galleries. At the same time the new Serpentine Sackler Gallery (designed by Pritzker Architecture Prize laureate Zaha Hadid) will host a site-specific installation by Adrián Villar Rojas, an Argentinian artist  renowned for his large-scale sculptural works, predominantly made in clay and brick.This Gallery transforms The Magazine, a former 1805 gunpowder store, located a few minutes' walk from the Serpentine Gallery on the north side of the Serpentine Bridge.


Posted by GertiesGirl at 14:58 No comments:

This is probably the oldest work of art I've featured, as I draw near to writing my 250th blog on art by living artists, freely on display in central London. You can see it in Tate Britain's revolutionary re-hang A Walk Through Britain curated earlier this year.

When I first saw it years ago, I was shocked. I knew what a sculpture was. It was a work probably  made out of precious materials like marble or bronze. It may require modelling in clay. The craftsmanship involved, even when working on easier, expendable materials like wood, seemed beyond the reach of ordinary mortals. It could be 'read' i.e. it represented a person or a place, an ideal or a value. Lastly it was so special it was mounted on a base or pedestal which seemed to mark out an untouchable space, and at the same time it was lifted high above the viewer.

And what about the title? That was a shock too. Couldn't I expect a pleasant oil painting or water colour with a pastoral landscape, a couple of lovers and even a small bunch of cattle?

Later I wondered if the title could be read as a signal that a new day had arrived in the history of art? Caro had broken the rules. In the early 1960s he began to make purely abstract works: sculpture constructed and welded in steel, comprising beams, girders and other found elements painted in bright colours.Such works caused a sensation. It took time for me to appreciate it. Looking back I think I was helped by Alexander Calder's mobiles. I'd probably only seen photographs, but that was enough. A visit to the Jean Miro Foundation in Barcelona clinched matters. I could appreciate and enjoy the immediate, real, physical presence and excitement of Caro's work.

His innovations heralded a revolution in art. Conventional ideas about materials, surface, scale, form and space were overturned by his radical reworking of all these elements - a principle which subsequently became a touchstone for contemporary sculpture.
www.anthonycaro.org

An authoritative paper by Alexander Calder on mobiles as works of art:
www.calder.org/system/downloads/1943-A-Propos.pdf

Posted by GertiesGirl at 12:09 No comments:

What is there to see in this picture? The impact is immediate: a cot and a mattress, set against a floor and walls like thunderous black clouds.

But cots should be where babies sleep safely, snug and cosy; probably wooden or wicker, prettily painted in pastels,  warmly upholstered, sweet smelling. Some are called cradles, with all the association of being held in loving arms

But this cot is the type into which no one goes of their own volition. Steel bars belong to prisons or perimeters and will brook no argument: they are designed to pen you in or to keep you out. It's where  the very young and the very old are placed.

But here is the paradox: cots or cribs or cradles are often wondrous places. Think of the Christmas story, of Christmas carols, of the Christmas crib here each year in London's Trafalgar Square beneath a huge tree donated by the good people of Norway.  Alternatively think of the fairy tales where nasty things happen. Babies are snatched up and grisly changelings put in their place. Poor Sleeping Beauty must have been lying in a cot in all innocence when the wicked fairy godmother, with no invitation to the christening in her pocket, got a terrible revenge for her exclusion. Later, when Sleeping Beauty pricked her finger on a spinning wheel she had to wait a hundred years before a handsome prince happened to pass by and woke her with a kiss.

And what about the lullaby sung to children for centuries: 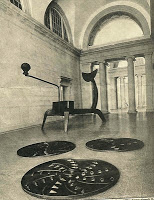 The only other artist I know who can  reach parts others can't reach by transforming ordinary objects in the way that Currie does is Mona Hatoum. Her Mouli-Julienne x 21  is a copy of a 1960s vegetable shredder, which I first saw in the Duveen Gallery at Tate Britain. I used one like it to purée carrots and spinach and apple for my children, only this was enlarged 21 times. And at its feet were three discs with multiple cutting and shredding edges, also like the ones I used, except that they were two metres in diameter. They lay there slim, flat and self-effacing, as if carelessly lying around in a terrible Hansel and Gretel kitchen.  A nightmare.


'Ken Currie is one of the outstanding figurative painters of his generation'.
So begins the introduction to an exhibition of his paintings at
the Scottish National Portrait Gallery,
which runs until September 22nd.

Posted by GertiesGirl at 17:32 No comments:

245. THE LAST SUPPER by TOM PHILLIPS

The twelve disciples are gathered for their last meal together.  The Gospel story says that Jesus predicts at the supper that he will be betrayed by one of his disciples that very evening, a betrayal which we know will lead to his crucifixion. The room is crowded, men packed together like a crowd waiting on the platform of a railway station. They are snatching a word or two with anyone nearby. No time for a deep theological debate. You can practically hear the babble of a conversation fed by anxiety, excitement and disbelief.

It's a subject which has been painted many times and with great authority.

Tom Phillips' jewel-like work - oil and collage on board - measures a mere 9 x 14 cm. The bottom half of the picture is restless, noisy and challenging. But above are still and silent slabs of colour of great beauty, For some reason I recall Piero della Francesca's The Baptism of Jesus painted in the 1450s. In that painting too the action is concentrated below where several conversations seem to be going on at once. (For a definitve comment about this painting turn to Tom Lubbock's words in The Independent's Great Works link below).  It depicts the moment when Jesus commits himself in public to his earthly ministry, the ministry which will one day lead to The Last Supper - and public execution.

P.S. I've broken my once-only rule to write again about this artist's work. I featured his painting of Baroness Susan Greenfield  at the National Portrait Gallery (Blog 126) because it's a portrait of astonishing vibrancy. It doesn't keep still, It's made up of 169 drawings, some on paper and some on computer screens, together with short sections of video. Like The Last Supper it  vibrates with colour and movement.

244. THE HOMESHELL HOUSE by RICHARD ROGERS

INSIDE OUT, Burlington Gardens, until October 13th

'... the exhibition gives an overarching sense of a man dedicated to making places for all people - and having a good time in doing so'. (The Guardian)

Posted by GertiesGirl at 15:56 No comments: