Not the Royal Academy, runs until August 20th.
Not the Royal Academy is an annual exhibition. Each work is hung for three weeks and buyers can take their purchases straight away, freeing up space for another to be displayed. All the works have been submitted to the Royal Academy in the hope that they might have been selected for the Summer Show. But only one in ten of the 8,000 submissions is  chosen and these works were not among them.
I like this solitary and unremarkable pair standing on an empty beach, warmly wrapped but not cumbered about with back packs, push chairs, cans of coke. I don't think they believe in ear phones either - no music, only the sound of the sea. They could be anyone – including you or me.
The artist achieves a subtle range of colours from a limited palette. And I like her honesty. Sometimes the North Sea looks like molten glass. It’s heavy and strong, not playfully shredding itself into channels and ripples, nor dashing itself against rocks. Here it looks unhurried yet determined. The reflected sun makes a silver overlay like a lace cloth 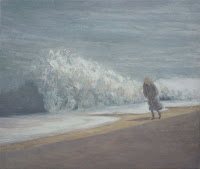 'East Wind' is more lively and just as evocative. I can taste the bitter cold. I probably enjoy these paintings even more because of their location, the East Coast, including Lowestoft Ness, the most easterly point in England. The artist writes ‘The Suffolk coast is wonderful...We (us artists) would like to keep it a secret really as it is so unspoilt, however it has a quiet beauty that lots of people miss so we think the secret is safe for a while!’.
www.deliatournay-godfrey.co.uk/
LlewellynAlexander.com
http://www.brightonartfair.co.uk
chappelgalleries.co.uk
Posted by GertiesGirl at 17:38